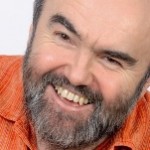 Andy Hamilton is probably best known as the creator, writer and producer of DROP THE DEAD DONKEY, which won the Writers’ Guild, British Press Guild, and British Comedy awards. His first television work was as one of the original writers of NOT THE NINE O’CLOCK NEWS, and he was also a writer and co-producer of C4’s first successful comedy series, WHO DARES WINS.

He wrote regularly for SHELLEY for Thames TV, and was the creator and writer of two series of THE KIT CURRAN RADIO SHOW, also for Thames. He wrote two single dramas for Regent Productions’ series of satirical comedies for C4, collectively entitled TICKETS FOR THE TITANIC.

Andy’s more recent drama work includes UNDERWORLD, a four-part comedy thriller, which he wrote and produced and which won a British Comedy award. He wrote and directed ELEVEN MEN AGAINST ELEVEN, which won the RTS award for best single drama and was also nominated for an International Emmy. The third series of BEDTIME, which Andy wrote and directed for Hat Trick, has just been broadcast on BBC1.

He was co-author with Alistair Beaton of the books THE THATCHER PAPERS (New English Library) and DROP THE DEAD DONKEY 2000 (Little, Brown).

His radio work is very extensive, originating as a writer with WEEKENDING and extending to writing and performing in THE MILLION POUND RADIO show (winner of Radio Times and British Press Guild awards) OLD HARRY’S GAME, which won a Sony award and a British Comedy award and REVOLTING PEOPLE.

In 1993, Andy won the RTS award for Lifetime Achievement in Television

After Dinner
Comedians and Satirical
Entertainers and Entertainment
Media