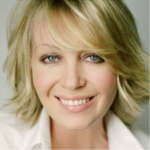 Kirsty was the face of Channel 5 News on its launched in 1997 where her presentation of the evening broadcast made news-reading suddenly glamorous. Kirtsy left Channel 5 for ITN in 2000. In 2001 she was the sole anchor for five hours of live coverage of 9/11.

Shortly after her return to Channel 5 Kirsty revealed her talent for timing, comedic flair, verve, and wit on Have I Got News For You, followed by Room 101, What Will They think of Next, Rat Trap and The People Versus. In 2007 Kirsty replaced Fiona Bruce as presenter of Crime Watch for the BBC where she continued to present for seven years.

However Kirsty is perhaps most widely known for her sublime hosting of BBC’s classic radio show, Desert Island Discs  – a format that began in 1942. An outsider for the job (bookies odds were 20/1!) Kirsty took over from Sue Lawley in 2006. Since then she has created her own cult following pulling an average of 3 million weekly listeners. Her gently probing approach has revealed unknown parts of castaways as diverse as Theresa May and Bruce Springsteen.

As a journalist, presenter and host Kirsty has had the privilege of interviewing some of the most significant and influential people of our time; Sir David Attenborough, Bill Gates, Tom Hanks and many, many, more.

Kirsty Young presented Desert Island Discs on BBC Radio 4 from 2006 until 2019. She earned much praised for her quiet and probing, yet sensitive interview style. She is the president of UNICEF UK.

Kirsty has hosted numerous prestigious award ceremonies including the London Evening Standard Awards and the The Which? Annual Awards. She’s a great host and a warm and generous speaker.