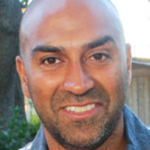 Amar Latif became a familiar face to millions of viewers via the Beyond Boundaries TV series, produced by Diverse Bristol for BBC2. Screened worldwide, this gruelling 220-mile challenge trekked on foot across the rugged interior of Nicaragua from the Atlantic to the Pacific. Amar had to ford swollen rivers, climb a 5,000 ft. volcano and navigate the second largest lake in Latin America.

The adventurers began their journey on the treacherous Mosquito Coast escorted by armed soldiers to protect them from bandits and drug traffickers. They then make their way through a jungle and crocodile infested rivers in twenty-eight days to cross two hundred and twenty treacherous miles. Tough for anyone. Even tougher for Amar Latif.

Due to the eye condition retinitis pigmentosa, Amar lost most of his sight by the age of eighteen. But through sheer determination, he turned a tale of loss, into one of inspiration and achievement. Today Amar is a blind traveller and entrepreneur, and a TV presenter with an astonishing track record of facing up to challenges in life.

At an early age in Glasgow Amar had been told that blind people couldn’t become accountants but he defied that, studying Mathematics and Finance at the University of Strathclyde, spending part of his course in Canada at Queen’s University in Kingston, Ontario. He qualified and spent seven years working at BT, finally heading the Finance Division and managing a team of seven accountants with responsibility for multi-million pound deals.

In 2004, Amar founded Traveleyes, the world’s first commercial tour operator to specialise in holidays for blind as well as sighted travellers. They have pioneered holiday travel industry options for millions of blind and partially sighted people around the world.

More recently, Amar took part in Celebrity MasterChef, their first blind contestant, reaching the semi-final and the final six of the competition, attracting new fans along the way. 2019 saw him team up with Sara Pascoe in Travelling Blind to lead the BBC documentary through some of Turkey’s most famous places in the pursuit of showing much there is to be gained by stepping out of your own comfort zone.

As well as directing documentary films, including work for UK’s Channel 4TV (Sightseeing Blind, featured at the British Film Institute), Amar has appeared in productions both as presenter and actor. In 2015 Amar led Channel 4TV presenters Adam Hills and The Last Leg team on a 3000-mile journey through Australia’s rugged outback in the 2-part series The Last Leg Goes Down Under.

Amar works with schools to take students on a whole range of travel adventures whilst having them describe the sights to other blind travellers. By broadening the mindset of young people today, Amar hopes now to create for the future a very much more accessible world for those with vision impairment. For his entrepreneurial achievements, Amar has been honoured with The Outstanding Young Person of the World accolade from the Chamber of Commerce International and the Stelios Disabled Entrepreneur Award.

Contact speaker Amar Latif via a Specialist Speakers agent for both in-person and virtual presentations.