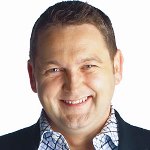 William Crawley is a broadcaster, speaker, journalist and the author of Will & Testament, one of the country’s most popular blogs. The diversity of subjects he deals with on television, radio, in print and online inevitably lead others to describe him as “versatile”, though he wonders himself if it isn’t a sign of a short attention span. Or the fact that he’s Irish.

His TV series Blueprint, which explored 600 million years of Ireland’s natural history in three hours of television, was described by the BBC in Northern Ireland as the “most ambitious multi-platform broadcasting project” in their history.

In his BBC interview series William Crawley Meets… , he travels around the world to talk to some of the controversial thinkers and activists who help shape the modern conversation – from the biologist Richard Dawkins to the philosopher Peter Singer, from the gay bishop Gene Robinson to the architect Richard Rogers.

After hundreds of interviews, he realizes that you catch more flies with honey than vinegar. Which may explain why Ian Paisley first revealed in an interview with William Crawley that he had prayed in private with his former enemy Martin McGuinness; why the Nobel prize-winning poet Seamus Heaney first talked about his pot-smoking days in Berkeley, California; and why Richard Dawkins had second thoughts about the use of the word “delusion” in the title of his global bestseller. Alas, it may also explain why the Hollywood screen legend Tony Curtis used so many expletives in one live interview that he made headlines around the world for “turning the BBC airwaves blue” (as the New York Daily News put it).

A former philosophy teacher, with a PhD in the subject, William is an expert on ethics and religion. Many of his programmes have investigated contemporary moral debates, including What’s Wrong With… ?, a round-table discussion show, and Frozen North, which took him to the Canadian sub-arctic to investigate the impact of climate change.

With a passion for the arts, William presents The Book Programme for BBC Radio Ulster, has hosted the BBC’s TV coverage of the Belfast Festival since 2005 and has presented features on the arts for BBC Radio 3 and Radio Ulster. One of his biggest challenges was a documentary for BBC Radio 4 in which William was tasked with explaining the annual Loyalist bonfires to an English audience without the use of subtitles.

William has also turned the camera on himself in a semi-autobiographical TV series which examined some of today’s big issues and some of Irish culture’s obsessions: death, booze and religion. In Dying For A Drink, William joined a short but illustrious list of BBC presenters who have become deliberately inebriated on screen.

He regularly presents news and political phone-in shows for the BBC in Northern Ireland, frequently hosts the drive-time news and current affairs programmes for Radio Ulster, rises early on Sunday mornings to present Sunday Sequence (UK Religion Programme of the Year) and occasionally presents Radio 4’s Sunday programme. He presented an edition of Sunday Sequence live from the Ground Zero site shortly after 9/11 and marked the 50th anniversary of South Africa’s Freedom Charter with a programme broadcast from the cell that held Nelson Mandela.

It’s a media career which happened by accident. Well over a decade ago William was asked to present a Thought for the Day, which, at less than 3 minutes, is an ideal format for a short attention span. He’s been broadcasting ever since.