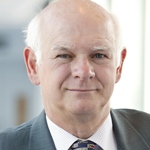 Sir Howard Davies was Director of the London School of Economics from 2003 until May 2011. He now teaches at the Paris School of International Affairs and at the Paris Institute of Political Science, is a member of the Regulatory and Compliance Advisory Board of Millennium LLC, the International Advisory Council of the China Banking Regulatory Commission and Chair of the Airports Commission.

As Deputy Governor of the Bank of England (1995-1997) the incoming Labour Government asked him to create a new regulator for the financial sector. As the first Chairman of the Financial Services Authority he was responsible for merging nine independent agencies to create the single regulatory body (1997-2003).

Following his graduation from Stanford Graduate School of Business with an MS degree in management sciences his career began as a management consultant for McKinsey and Company.

He worked at the Foreign and Commonwealth Office; this included a stint as private Secretary to the British Ambassador to France. Whilst at HM Treasury he worked initially as an official and later as a special adviser to the Chancellor of the Exchequer.

From 1987 Davies spent five years as Controller of the Audit Commission followed by three years as Director-General of the Confederation of British Industry (1992-1995). Non executive directorships and appointments have included GKN plc (1989-1995), Morgan Stanley (2004-2010), Paternoster Ltd (2006 – present), Prudential plc (2010 – present) and the International Advisory Board of NatWest Bank Plc.

Howard Davies was chairman of the Phoenix Group and 2015 was chair of the UK Airports Commission. He is Chairman of NatWest Group.

His publications have included co-authored works such as Global Financial Regulation: The Essential Guide, editing The Chancellors Tales, Banking on the Future: The Fall and Rise of Central Banking (Princeton University Press 2010) and The Financial Crisis: Who’s to Blame (Polity Press 2010). Davies writes regularly for The Financial Times, The Economist, The Times Higher Education Supplement, Project Syndicate and Management Today in addition to his extensive international lecturing at Davos and the World Economic Forum.