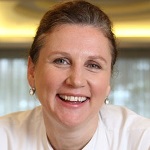 Angela Hartnett is one of the most high-profile women in the restaurant world. During her childhood, Angela’s Italian grandmother and mother instilled in her an appreciation and love of good food. After completing a degree in Modern History at Cambridge Polytechnic she secured her first job at the Sandy Lane Hotel, Barbados.

On returning to the UK, Angela joined the young team at Aubergine, cooking under Gordon Ramsay. Working in a predominantly male brigade, who predicted she would last no more than a week, Angela soon proved her worth during a gruelling year and saw the restaurant achieve its first Michelin star.

Six months followed in the kitchens of Zaferano before moving to L’Oranger where she worked under the watchful eye of Marcus Wareing, climbing the ranks to become sous-chef before moving with Marcus to Pétrus. Within seven months of it opening she had become head chef and helped the restaurant achieve a Michelin star. She launched Amaryllis in Scotland in 2001 and then turned her attention to the launch of Gordon Ramsay’s Verre in Dubai.

In 2002 Angela returned to Britain to open MENU and The Grill Room at The Connaught Hotel, where she combined a modern European menu with an Italian influence, while continuing to produce classics. This partnership continued until The Connaught closed in 2007. Later that year she opened Cielo, a Ramsay Group restaurant in Boca Raton, Florida.

In 2003 she won the Square Meal Guides’ BMW Best New Restaurant Award and in 2004 won her first Michelin star. The following year saw her win a legion of new fans appearing alongside her mentor Gordon Ramsay in ITV’s highly successful series Hell’s Kitchen. Further appearances include a special Tonight with Trevor McDonald advocating healthy eating for children, presenting a Christmas series with GMTV and competing for Wales in the Great British Menu competition on BBC Two.

In 2007 Angela was awarded an MBE for services to the industry. Her first book, Angela Hartnett’s Cucina: Three Generations of Italian Family Cooking has become a bestseller. In 2008 she launched Murano, a fine dining Italian restaurant, in Mayfair and York as well as Albany Restaurant in Camden Town. Currently she is Chef Patron at Murono and Cafe Murano, at Cucina Angelina in Courchevel, and is the joint owner of Merchant’s Tavern in Shoreditch.