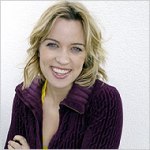 Broadcaster and presenter Amanda Hamilton is one of the UK’s leading popular nutritionists.

Amanda’s no nonsense approach to health and wellbeing has made her a media favourite. The Sunday Times called her Queen of the Detox Scene, and she has become a well known TV face, through Something For The Weekend on BBC2 and GMTV.

Her other credits include How to Live Longer and Should I Worry About..? with Richard Hammond and Landward for BBC Scotland. Her detox Spa is the subject of the hugely successful series The Spa of Embarrassing Illnesses and Teen Spa for which she is presenter and co-producer. It is in production for its fifth series and has been sold around the world. Amanda has also been co-presenter of the show Slim Chance: Fix My Family as well as being regular guest expert on GMTV, BBC, Sky news and BBC radio.

Amanda consults with the Scottish Government on the National Curriculum for Excellence and has been voted as one of Scotland’s Food and Drink Ambassadors for 2010/2011. She is a senior associate of the Royal Society of Medicine and a member of the Guild of Health Writers. She has published two books and her third title, on the subject of fasting was published in 2013.

Areas of expertise include nutrition, general health/fitness, anti-ageing, weight loss, complementary therapies, detox, fertility, stress management/executive health and yoga. As a mother of four kids she is also somewhat of an expert on children’s issues! She has represented Scotland internationally at sports and spent many months in India training in yoga and ayurvedic medicine.

She has clinics in London’s New Bond Street and Edinburgh’s New Town. She is the Director of her signature brand of spa retreats that operate at Champneys, Stobo Castle and Gleneagles as well as an eco-venue in the Algarve.

Amanda speaks Spanish and French and has a business degree having gained a scholarship to study in the States and has worked with a wide range of clients including Microsoft, NHS, the Women’s Institute (with James Martin) and IBM.