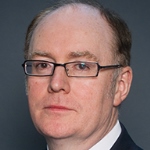 Dr Gerard Lyons has spent nearly a quarter of a century in highly influential roles in the City of London. He is a leading economist and forecaster of trends and markets and has twice been ranked top global forecaster by Bloomberg.

Formerly Chief Economist and Group Head of Global Research at Standard Chartered Bank and Swiss Bank Corporation. He was previously Chief Economic Advisor to the then Mayor of London, Boris Johnson.

His book, “The Consolations of Economics”, explores economics, finance, geopolitics, policy and risk, and explains the underlying drivers of our economic outlook, and justifying continued positivity.

Gerard is a very accomplished speaker and has held and holds many technical roles such as:
• Advisory board of the Pro-reform think tank Open Europe

• Advisory Council of the Official Monetary and Financial Institutions Forum

• Elected to the Council of the Royal Economic Society