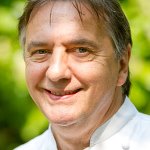 Born in Besançon, France in 1949, Raymond Blanc is acknowledged as one of the finest chefs in the world. His exquisite cooking has received tributes from every national and international guide to culinary excellence.

Raymond arrived in England in 1972 to work as a waiter at the Rose Revived Restaurant near Witney. When the chef became ill, he took over and two years later the restaurant gained entry into the Michelin Guide.

At the age of 28, Raymond Blanc opened his first restaurant, Les Quat’ Saisons in Summertown, Oxford. After just one year, the restaurant was named Egon Ronay Restaurant of the Year and a host of other accolades including Michelin Stars and Pestle & Mortar awards followed.

It was in 1984, however, that he fulfilled a personal vision, creating a hotel and restaurant in harmony when he opened Le Manoir aux Quat’ Saisons. It is the only country house hotel in the UK which has achieved two Michelin Stars for a total of 19 years. “His house is as beautiful as a tale of Lewis Carroll,” commented Gilles Pudlowski. It has been awarded two Michelin stars and scores 9/10 in the Good Food Guide.

In 1991 Raymond established The Raymond Blanc Cookery School, welcoming both enthusiastic amateurs and professional cooks to the kitchen. The school provides the opportunity to develop their skills whilst learning some of Raymond Blanc’s kitchen secrets.

In 1996 he opened his first Le Petit Blanc brasserie in Oxford. His aim was to be the best within the brasserie scene in England – serving good quality, freshly prepared food at a price that was accessible and represented excellent value. Another three brasseries were opened in the subsequent years and achieved the perfection which Mr Blanc had set out to achieve by becoming the only brasseries in the UK to achieve the Michelin Bib Gourmand.

He has written a selection of best sellers, including Cooking For Friends, A Blanc Christmas, the Sunday Times bestseller Recipes from Le Manoir aux Quat’ Saisons, Blanc Vite and his most recent book Foolproof French Cookery. Raymond has numerous consultancy roles and partnerships with many worldwide brands, among them are Saveur Magazine (USA), Waitrose, Virgin Atlantic Airways and Marks & Spencer.

Raymond Blanc is an engaging and highly entertaining raconteur, his dedication to creating the finest experiences for his patrons is carried into his speaking work.