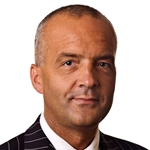 Graeme is a visiting professor of economic policy, a member of the IEA Shadow Monetary Policy Committee and has a weekly column in the City AM newspaper. Over the past decade he has undertaken over 100 live television and radio interviews for BBC News, Sky News, the Radio 4 Today Programme and Radio 4 World at One.

Prior to forming Macronomics, Graeme was Director of Economics and Prosperity Studies at the Legatum Institute, focused on the drivers of prosperity across the globe.

Between 1997 and 2013 he worked as Chief Economist and Director of Policy at the Institute of Directors (IoD), where he was also a Main Board Director. The IoD represents around 40,000 business leaders in the UK and overseas.

Graeme represented the IoD in discussions with the Chancellor of the Exchequer and 10 Downing Street.

Earlier in his career he was Chief UK Economist and Chief International Economist, at The Henley Centre for Forecasting. He was also Economic Adviser to the Scottish Provident Investment Group.

Graeme is an acknowledged expert on the economics and politics of Brexit, having written and spoken widely on this topic

One of the UK’s leading experts on the economics and geopolitics of the UK and the EU, and where we go from here.
Written and spoken widely on the topic, challenging both sides of the debate.

More generally, Graeme has given over 1,000 speeches, in 25 countries, to business audiences over the last decade.
Events have ranged from dinner speeches, to conference keynotes to 2,000+ people in the Royal Albert hall and given well over 100 live TV and Radio interviews, to BBC News, Sky News, Radio 4 Today Programme etc.

His main areas of specialism include: