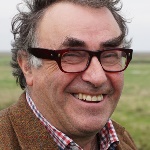 Desmond MacCarthy invited TV cameras to Wiveton Hall to document his struggles to keep the ancient house and farm afloat. The gamble paid off, the first series of BBC2’s Normal for Norfolk achieved audiences of over one million. Desmond’s fan base keeps on growing – but the challenge of keeping the roof on 17th century Wiveton Hall remains. Desmond is the archetypal Englishman.

Desmond has lived at Wiveton Hall on the north Norfolk coast all his life. His father died when he was 15 and after a stint at Cirencester Agricultural College he took over the running of the 250 acre farm and the rundown manor house. His first foray into diversification was growing fruit for pick your own.

Today the business is made up of farm, café, shop, glamping site, and ‘maize maze’ as well as year round holiday letting. In peak season he employs a staff of 50 to run the place and look after the 500 people a day who come to Wiveton .  It’s a far cry from the early days when Desmond sat at the end of the drive flogging strawberries from an old shepherd’s hut and the first bank holiday after the cafe opening when Desmond and his cousin were alone in the kitchen having to water down the soup because they’d run out of food.

Devoted to his house and farm Desmond is a countryman born and bred. He thoroughly enjoys country sports and fo

r Desmond the countryside and its traditions are a vital resource that should be treasured and preserved. At Wiveton Hall farming and conservation go hand in hand – and he’s not afraid of a bit of untidiness creating diverse habitat for wildlife. Turning a profit is vital for survival but not at any cost. Desmond MacCarthy has much to tell audiences about business, about the countryside and about persistence and determination to preserve what is worth preserving.

Specialist Speakers Bureau: nominated by Desmond MacCarthy agent for speaking and presentation in both in-person and virtual settings.