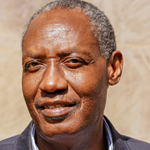 Kaddu Kiwe Sebunya took over as CEO of the African Wildlife Foundation in 2019, after serving for three years as AWF President. He has more than twenty years experience in conservation at grassroots, national and regional levels in the USA, in Africa, and in Europe. Kaddu is dedicated to a vision of a modern Africa where development includes thriving wildlife and wildlands as a vital cultural and economic asset for the benefit of future generations.

The AWF under Kaddu’s leadership has been able to amplify the voice of African conservation. Through engagements with governments and private sector players, there has been a significant shift towards conservation priorities right across the continent. African governments have now begun to give conservation the prominence it deserves – but the real work still lies ahead – creating influence for a truly African constituency for conservation.

During 2020, Kaddu led the AWF in launching its new 10-year strategy aimed at achieving three goals:

To support and promote African-led policy, planning, and finance leveraging wildlife and wildlands as essential to development.

To conserve, protect, and restore Africa’s ecosystems and the services they provide.

And to conserve Africa’s wildlife in situ and reduce poaching and other forms of illegal wildlife trade.

Kaddu has played a significant role in distinguishing AWF as the conservation NGO which puts the needs of African people first. He has spearheaded efforts that have proven that conservation goes hand in hand with development, economic growth, and the genuine well-being of communities on the ground. More recently he has brought that experience to African corporate and political leaders to cultivate conservation leadership at the highest level.

Kaddu believes that conserving Africa’s wildlife is too important and too urgent to be left to charity or the West alone. His concern is that there are still an insufficient number of African voices today leading the fight against the destruction of habitat and wildlife. He argues that it is time the African elite stepped forward. “We need their voices and networks to build a truly authentic African voice against the destruction of our natural wildlife heritage. It’s time to re-imagine the conservation narrative”

2020 has been a tremendously significant year for biodiversity and wildlife conservation with the global COVID19 pandemic giving everyone the opportunity to rethink our relationship with nature. To augment the AWF message Kaddu delivered the opening remarks together with Jane Goodall at the ESGX Live Webinar – Survival Instincts – Rethinking Our Relationship with Nature.

Other recent important engagements include leading the AWF delegation alongside a high level panel of African Government representation at the UK Government hosted Illegal Wildlife Trade Conference in London in October 2018. And in 2019 included speaking to senior NGO leaders and international government representatives at an event seeking to address Mine Clearance and Conservation at Chatham House hosted by His Royal Highness the Duke of Sussex.

Kaddu Kiwe Sebunya’s roles as President and now CEO of AWF make him now the go-to-reference for matters touching on African conservation. He is a member of the Wildlife Conservation 20 – the WC20, a global network uniting 20 of the most prominent conservation NGOs at the forefront of protecting world ecosystems. Recently the group issued an unprecedented joint declaration to the G20 calling for urgent action to invest in nature to protect biodiversity in order to reduce the risk of pandemics in the future.

Kaddu is also now a member of the Club of Rome – a network of thought leaders from a rich diversity of expertise committed to facilitating the difficult conversations and the bold policy actions required to confront the planetary emergency facing our common home. The goal of the network is to actively advocate for paradigm change to enable society to emerge from our current crises within a more sustainable and resilient biosphere.

Kaddu Kiwe Sebunya is available to speak on behalf of the African Wildlife Foundation both in-person [Covid restrictions permitting] and virtually.

Kaddu holds a bachelor’s degree in Social Sciences and two master’s degrees: an MA in Law, Policy and Diplomacy from The Fletcher School, Tufts University, USA; and an MSc in Sustainable Resource
Management and Policy from Imperial – Wye College, University of London.