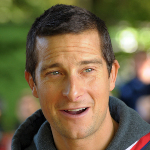 Bear’s talks focus on the simple qualities that separate life and death and success and failure: the intimacies and realities of true teamwork, the honesty needed in intense environments and the courage that comes not from bravado but from something else inside.

Throughout his career he has faced many challenges, in both solo and team expeditions. His motivation, leadership and personal capabilities have excelled at sea, on land and on water. In an uncertain world, one thing is certain, there will be many more challenges ahead.

Every year the death toll on Mount Everest rises and for every ten mountaineers who make it to the top, one will die. At 7.22am on 26 May 1998 Bear entered The Guinness Book of Records as the youngest, of around thirty, British climbers to have successfully climbed Everest and returned alive. He was only 23 years old.

The actual ascent took Bear over ninety days of extreme weather, limited sleep and running out of oxygen deep inside the death zone (above 26,000 feet). The expedition was raising funds for the Rainbow Trust and Great Ormond Street Children’s Hospital.

Prior to the Everest Expedition Bear spent three years with the British Special Air Service (21 SAS). During this time he suffered a free-fall parachuting accident where he broke his back in three places. After months of rehabilitation, focusing always on his childhood dream of Everest, he slowly became strong enough to attempt the ultimate ascent.

Bear’s first book Facing Up went into the top-10 bestseller list. Worldwide this book has touched people through its enduring honesty, courage and humility. Bear is a popular guest on television shows, which have included Oprah, Jay Leno’s Tonight Show, Friday Night with Jonathon Ross, Heaven and Earth and GMTV as well as radio programmes such from BBC’s Radio 1 to  Radio 5 Live.

In 2003 Bear successfully completed another ground-breaking expedition, leading a team across the freezing North Atlantic Arctic Ocean in a small open rigid inflatable boat. Suffering weeks of frozen spray and icebergs, the expedition was filmed for a documentary and raised funds for the Prince’s Trust charity. The book describing this remarkable journey Facing the Frozen Ocean was short-listed as Sports Book of the Year and Bear was awarded an Honorary commission in the Royal Navy for this record-breaking feat.

Bear was then commissioned to present a series of 15 hour long TV programmes called Man Vs Wild for Discovery Channel Worldwide, followed by an 8-part TV series for Channel Four titled Born Survivor: Bear Grylls. These programmes featured Bear being parachuted in to some of the most inhospitable deserts, jungles and mountains on earth and showing people how to survive!

His first major TV series was Escape to the Legion, for Channel Four. Bear endured the basic training regime alongside new recruits to the French Foreign Legion, in North Africa, recording their experiences with possibly the toughest fighting force in the world.

Man Vs Wild went on to become the top cable show in America and reached a global audience of over 1.2 billion viewers, making it one of the most watched programmes on earth. The book accompanying the Born Survivor series stayed in the Sunday Times Bestseller List for 10 weeks.

In 2007, he became the first man to fly a powered paraglider to a height above Mount Everest in the Himalaya. Sponsored by GKN, the team raised over $1 million for Global Angels and children’s charities worldwide. 2008 also saw Bear lead a team to climb one of the most remote un-climbed peaks in the world in Antarctica. The expedition used wind powered kite skiing, bio-ethanol powered jetskis, electric powered paragliders and good old footwork.

In 2009 Bear was voted by the Scouts to become their Chief Scout and figurehead to 28 million Scouts worldwide. He becomes the youngest Chief Scout in history.