Sir Ivor Roberts is one of the most experienced and highly respected British diplomats alive today. He first entered Her Majesty’s diplomatic service in the West African Department in 1968. Since then he has traversed the globe through postings in Middle East, the Balkans, Western Europe, even the Pacific State of Vanuatu at the time of the rebellion.

His skill and experience resulted  in him working on the European Community’s Common Agricultural Policy and in the European Parliament.

In the 1980’s he became Head of the Economic and Commercial Department and Agricultural Adviser based in Canberra, Australia.

After four years in Madrid as Minister in the British Embassy, he was appointed Chargé d’Affaires and Consul General in Belgrade in 1994 and became the UK’s first ambassador to the Federal Republic of Yugoslavia. He conducted vital negotiations on behalf of international mediators and was involved in the negotiations for the release of British soldiers held hostage by the Bosnian Serbs. He left Belgrade at the end of 1997, taking a year off to write and lecture about his personal experiences in the former Yugoslavia.

Sir Ivor served as British Ambassador to the Republic of Ireland for five years prior to his final appointment as Ambassador to Rome from 2003 to 2006. His retirement coincided with his election as the President of Trinity College Oxford.

In 2009 Sir Ivor was the major contributor to the first new edition for thirty years of Satow’s Diplomatic Practice,(Oxford University Press, 2009) widely regarded as the definitive handbook to international diplomatic practice.

Sir Ivor speaks fluent Italian, French and Spanish and passable Serbo-Croat. Sir Ivor is also a patron of the Venice in Peril Fund and chairman of the Council of the British School of Archaeology and Fine Art in Rome. 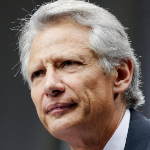