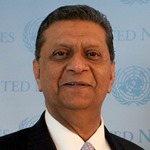 Amir Dossal is Founder and Chairman of the Global Partnerships Forum, a non-profit working to address economic and social challenges through partnerships, which he established in 2010. The GPF serves as a knowledge platform, providing changemakers with the tools to build innovative partnerships. www.Partnerships.org

Amir is Co-Founder of the Pearl Initiative, a CEO-led program, promoting transparency and accountability in the Middle East. In 2013, he was appointed Co-Chair of the Sustainable Oceans Alliance, a global initiative to focus the need for healthy oceans in the UN Sustainable Development Goals. He is Co-Founder of the Ocean Sanctuary Alliance. Amir is also Commissioner of the Broadband Commission for Digital Development. In May 2014, President Tommy Remengesau, Jr. appointed Amir as his Special Representative of Palau for Global Partnerships. In January 2015, Amir was appointed Special Adviser to the United Nations Global Compact, for Strategic Relationships. From 2010 to 2014, he served as Special Representative of the Secretary-General of the International Telecommunication Union for Global Partnerships.

He is a 25-year veteran of the United Nations, and was the UN’s Chief Liaison for Partnerships. As Executive Director of the UN Office for Partnerships, he managed the $1 billion gift by media mogul Ted Turner; and forged strategic alliances to address the Millennium Development Goals.

In 2005, Amir was asked to establish and manage the UN Democracy Fund, whose core mission was to strengthen institutions around the world, and enhance democratic governance in new restored democracies. In 2006, he was asked by Secretary-General Kofi Annan to set-up the Peacebuilding Support Office at the United Nations, to assist post-conflict countries in bridging the gap between peace, security and economic development. Over the years, Amir has worked on a number of peace, security and human rights-related activities and humanitarian programmes across the globe. These efforts threaded together the leadership role of international organizations, multilateral and bilateral institutions, linking them with non-state actors, with a view to encouraging innovative collaboration. This included supporting concrete projects such as women’s empowerment, the role of parliament and media in democracy, the innovative use of technology in economic and social development programmes, etc. From 1993 to 1997, Amir served as the Chief of Finance Management in the Department of Peacekeeping Operations, where he oversaw finances for 24 peacekeeping operations worldwide (annual budget of $3 billion). During his tenure, he set-up a sophisticated military asset management system, to increase transparency and accountability.

Amir has worked with sustained commitment toward an overarching vision of uniting public and private energies for social progress. By nature a social innovator, his work is an endeavor to bond the power of the private sector, government, and civil society; in order that together, they may better serve the greater good.

In December 2010, His Serene Highness Prince Albert II of Monaco, appointed Amir Dossal as Ambassador for Peace and Sport. In October 2010, he received the Humanitarian Award from the UN Association of New York, for his accomplishments in Partnerships to End Poverty and World Hunger. In February 2011, Amir was appointed Special Envoy to the World Youth Peace Summit.

Amir is a UK Chartered Accountant (FCA) and a PricewaterhouseCoopers London alum. He has lived and worked in Asia, the Caribbean, Europe, Middle East, and North America. Amir regularly undertakes speaking engagements and frequently serves as a moderator for high-level panels for the UN system and other international organizations, engaging Heads of States and Ministers.

He also serves on the board of several non-profits, including CITYarts, Global Social Compliance Programme, and the Humpty Dumpty Institute. Amir is also a Patron of the World Congress of Muslim Philanthropists (WCMP), Trustee of the LDNY Foundation, a founding member of the Advisory Board of The Ethical Capitalism Group℠ LLC, Strategic Advisor to the DNA Summit, and Advisor to Ideapod, a new social media platform for ideas.