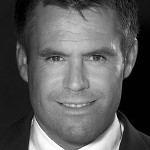 Kenny Logan is a house-hold name in both Scotland and England as a rugby player and is now a successful businessman. With his wife, Gabby of equal fame, he has done much to support children’s charities having found success on the rugby pitch and on screen, having appeared in the successful BBC series Strictly Come Dancing and coming 5th overall in the competition.

Kenny played rugby at international level for thirteen years, achieving seventy caps and cementing his name as one of rugby’s greats.

He began his sporting career as a goalkeeper for Dundee United FC before settling on rugby and playing for Stirling County in his home city of Stirling. In his subsequent career, he played for Wasps, Glasgow, and London Scottish.