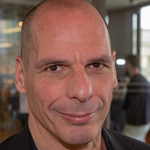 Yanis Varoufakis is the charismatic former Greek Minister of Finance and one of the driving forces behind the Syriza party’s anti-austerity policies. Described the the Guardian as the ‘bad-boy of anti-capitalism’, Yanis is an important figure in current debates around the European financial crisis, notably putting forward the view that bailout packages were short-term measures that would have damaging effects in the long-term on debtor countries like Greece. Yanis resigned from his post after seven months as the Minister of Finance, viewing the governments agreement to the bailout terms as a ‘surrender’.

Yanis studied mathematical economics after being advised to switch from his focus on mathematical physics, by economist Andres Papandreou – the man would go on to become the Prime Minister of Greece. Yanis graduated with a PhD in economics from Essex University in 1987, and continued to work in academia, teaching in a number of universities, including Essex, East Anglia, Cambridge, Sydne,y and Athens. He worked with video game company Valve Corporation, whose ownership of the Steam platform has made them one of the most powerful and forward-thinking entertainment companies in the world.

Yanis has written many books and is considered one of the world’s leading voices on game theory, his 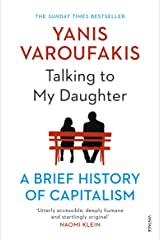 published works including The Global Minotaur: America, Europe and the Future of the Global Economy, tracing the origins of the global economic crisis, claiming its roots go far deeper than most commentators’ presumptions. His most recent work is Another Now: Dispatches from an Alternative Present.

As a speaker Yanis Varoufakis is highly accomplished, able to blend contemporary economic insight with his own personal story, sharing his thoughts on contemporary Marxism, the Eurozone, and the current status of the Hellenic Republic.