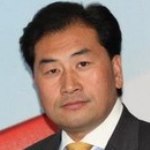 Dr George Lee was born and brought up in a Hong Kong shanty town pig shed where he worked in a toy factory from the age of five making plastic flowers and toy soldiers. He came to the UK aged ten unable to speak English and worked in his family takeaway. He attended a comprehensive school on a poor council estate in 1970s Portsmouth where most of his peers ended up as manual workers in the local dockyard. Against this unpromising beginning he won a Bramshill Police Staff College scholarship to study at Trinity College Cambridge; and he was the first British Chinese to join the Civil Service, the Police and stood for Parliament….

His in the London Metropolitan Police began in 1981 and he rose to become Chief Inspector. He started out on a scheme for fast-tracking ambitious and creative people allowing him to study whilst being paid, securing himself an undergraduate degree in Oriental Studies at Trinity College, Cambridge, which he completed a year early. George Lee was earmarked for future progression onto chief constable.

His career in The Met included roles in the Drug Squad, Murder Squad, Organised Crime Unit, Riot Squad and as Sector Commander. He became a part of a unit that assisted the Hong Kong police when it came to dealing with the notorious, and famously vicious, Triad gangs. He was the founder of the ‘Black Police Association’ in which role he advised the home office when it came to race relations.

In 1998 George Lee decided that a career change was in order. After getting neck-deep in the intensity of the police and having served in multiple prestigious organisations within the force, George moved to working within corporate consultancy

Lee’s consultancy career can only be described as results-driven and comprehensive. Starting at Gemini Consulting (now Cap Gemini) as a managing consultant, George showed his knack for team building and efficiency as he went on to lead multi-disciplined and geographically dispersed teams. Working with a variety of cultures, Lee managed to claim three definitive results for Gemini Consulting. First, he assisted in Tesco’s rise to become the UK’s number one supermarket. He went on to create Egg – the world’s first internet bank. And he helped design Trainline.com, probably the most recognisable ticket purchase app in the UK today.

Following his time at Gemini Consulting, Lee went on in 2003 to join T-Mobile at their Bonn HQ. He was quickly promoted to Senior VP and went on to wildly transform the company into a much more competitive and profitable version of itself. The genesis of this transformation was his savings of $1.5bn of annual Opex savings, smashing his target of $1bn. He cultivated their new operating model as well as development of their new high-performance team culture around all of their global operations. He created a new $800m revenue stream by setting up a MNC business too.

Sadly he had to leave this role in 2006 due to his domestic requirement to return to the UK. From this he went to (Mercer) Oliver Wyman Consulting where he became a managing partner for EMEA, P&L and GM. His short success here is quite amazing. He established Digital Practice from scratch and gained many major global clients along the way. He helped to map out strategies across the value chain, turning it quickly into a £40m practice. He left this in 2010 where, with encouragement from David Cameron, he stood in the General Election as a Conservative parliamentary candidate.

Following his joining Logica George grew revenue by 15% in just two years. He created Global SBU and turned it into Logica’s largest commercial BU. He is the executive responsible for the transformation of the company from a local to a global operating model. He joined as global client director and mega-deal lead. He was promoted to SBU Managing Director in under 12 months. Shortly after setting up their Chinese operations, George left following the take-over of the business by CGI.

From this, George took up a position as Senior Partner at Wipro Technologies. In a mere three years at Wipro Technologies George worked his magic yet again. He established operations in China, a recurring trend amongst George Lees’ work that seems to pay dividends. In around twenty months George achieved 20% revenue growth and increased their margins by 5%.

Lee currently holds two positions. His PhD was started in understanding The Impact of Economic Modernisation on Institutional Decision-Making and completed in eighteen months. He is senior advisor to Cambridge China Centre on the Chinese Executive Leadership Programme, where he can be found advising senior mainland executive and government official on a diverse and complex range of issues including issues around the One Belt One Road initiative.

At Cambridge University he is Session Lead and Secretariat to the annual Cambridge Global Economic Crime Symposium in which he advises institutions on economic risk mitigation.

Furthermore, George spends time working for his own consulting service Trinity Transformation Ltd as Managing Director. At Trinity he has helped design and deliver a new IT model for Walgreen Boots Alliance, now number one pharma retailer in the US. He was also a director at VodafoneLive! where he designed and created the worlds first global mobile multi-media proposition, one that has arguably changed the way that people live in the modern world.