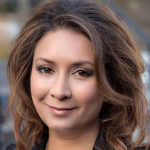 Ayesha Hazarika studied comedy with Logan Murray. And that was whilst she was holding down a job as a press officer at the Department of Trade and Industry. Politics by day, stand-up by night. But comedy had to take a second place to politics when she became an advisor to Labour Party leader Ed Miliband and to Harriet Harman.

Following the outcome of the 2015 General Election Ayesha left politics to write for The Scotsman and the Evening Standard and in 2018 she co-authored Punch and Judy Politics: An Insiders’ Guide to Prime Minister’s Questions with former colleague Tom Hamilton.

Iain Dale lists Ayesha Hazarika amongst his ‘100 Most Influential People on the Left’. In 2020 Ayesha became one of the launch presenters on Times Radio delivering the weekend drive-time programmes.

Ayesha is available for both in-person and virtual speaker bookings via Specialist Speakers.