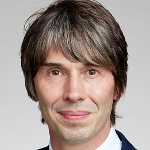 Britain’s foremost expert on the wonders of the universe, Professor Brian Cox is the man responsible for delivering scientific discovery into the homes of the nation.

Brian completed his thesis in 1998 on diffraction at large momentum transfer with the H1 experiment at HERA in Hamburg. With his primary research focusing around high-energy particle physicals he is currently Professor of the School of Physics and Astronomy at the University of Manchester.

Brian has presented the hit TV shows Wonders of the Solar System, Stargazing Live, Wonders of Life, Human Universe, Forces of Nature covering popular science from stars and planets to atoms and microbiology. Brian has authored numerous books that have gone on to become international bestsellers, including his co-authored title Why Does E=mc2? and The Quantum Universe. He also contributes to newspapers and journals including the New Statesman and The Times. Professor Cox was awarded the Lord Kelvin Award in recognition of his ‘communicating the appeal and excitement of physics to the general public through the broadcast media’.

Brian’s style is down-to-earth, charismatic, warm and engaging, and he uses his charm to make celebrities, comedians and scientists feel comfortable enough to play along in the light hearted BBC Radio 4 show The Infinite Monkey Cage, in which guests and hosts answer scientific questions and describe complex content in accessible and entertaining style.

As a speaker Brian has presented many TED talks and addressed influential audiences such as the World Economic Forums in Davos and in China.

And, of course, Brian earned his title as the ‘rock star scientist’ playing keyboards in the band D:Ream, scoring a UK number one hit with Things Can Only Get Better in 1994 plus eight more Top 40 hits!

Picture, Creative Commons, with thanks to Duncan Hull.