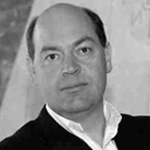 Sinclair Beecham: speaker on food and customer service and founder of Pret A Manger.

Sinclair Beecham graduated from the Polytechnic of Central London in 1983 after studying Urban Estate Management, where he met Julian Metcalfe. He then joined Crest Estates, a property developer as development and marketing executive. He then teamed up with his partner Julian Metcalfe to establish Pret A Manger.

In 2002 McDonald’s reached an agreement to acquire a minority interest in Pret A Manger. Founders Julian Metcalfe and Sinclair Beecham said, “Since opening the first Pret A Manger in 1986, we have been obsessed with selling good natural food to people who are in a rush at lunchtime. After 14 years, we are fortunate to have thousands of loyal customers in the UK and many visitors who have urged us to open Pret A Manger abroad. But to do this, we need a huge amount of support. Every new country will be an enormous challenge.” In 2008 Pret was sold to Bridgepoint with the Pret management team retaining a thirty-three percent stake.

In 2009 Sinclair Beecham sold his remaining stake in Pret A Manger.

Sinclair Beecham has now moved into the hotel business. He is the Founder and Chairman of WS Hotel Ltd opening the Hoxton, a 205-bed hotel in which he invested £18 million in Shoreditch, East London.

It was announced in 2021 that Sinclair Beecham is to be part of a new funding deal along with Luxembourg-based JAB Holdings to enable Pret to open two hundred new UK outlets by 2023 and to further expand in five new, as yet undisclosed, markets.

Pret A Manger is recognised as a leader in customer service and staff motivation and Sinclair Beecham is a powerful speaker on the factors behind the success of all his business ventures. Contact Sinclair Beecham via a Specialist Speakers agent for both virtual and in-person Q&A speaking, engagements.