Specialist Speaker Janan Ganesh was political correspondent for The Economist for five years, and he was a researcher at Policy Exchange for two. Today he is the FT’s chief US political commentator based in 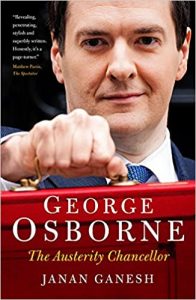 Janan is the author of George Osbourne: The Austerity Chancellor, a biography examining the life and career in government of the former Chancellor of the Exchequer. Ganesh ‘makes sense of a man who is both a personal enigma and a political machine’.

Janan Ganesh is a biweekly columnist and he is an associate editor at the FT. He writes not only on American politics but also on American and British culture for FT Weekend. Much read and very much admired, he features in the Debrett’s 500 list of the most influential figures in British society.

‘The Austerity Chancellor’ is published by Biteback publishing.